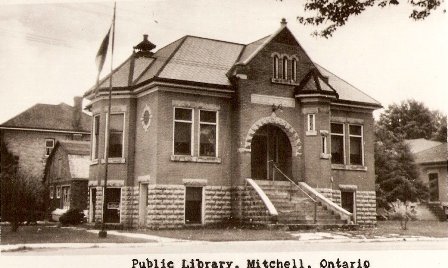 The Mechanics' Institute had operated from the building that later became the Royal Hotel on the corner of Ontario Street and St. Andrew Street but, in 1908, the Mitchell Library Board bought the lot at the corner of St. Andrew St. for $450.  The town contributed $300 of that amount towards the purchase of the lot where the library still stands.

In 1908 Mitchell was fortunate to receive a grant of $6,000 from Andrew Carnegie, the Scottish immigrant who made his fortune in the U.S. steel industry. After his retirement and sale of the Carnegie Steel Company in 1901, Andrew Carnegie's philanthropy became his new full-time occupation. Though he was a benefactor for a variety of causes, public libraries were his primary focus. He felt that 'the best gift' that could be given to a community was a free library. With the help of this generous contribution, in 1910 the Mitchell Library Board completed its Carnegie library at the corner of St. Andrew Street. In total, 125 Carnegie libraries were built in Canada with 111 of them located in Ontario.

Carnegie libraries share a number of similar design features. Most of the buildings were single storey with exposed basements and had centrally located main entrances frequently accessed by a series of steps that were meant to symbolize man's rise to higher levels through reading. A symmetrical arrangement of windows was another feature shared by several of the Carnegie buildings.

W.E. Binning was the architect responsible for the design of the library in Mitchell as well as at least seven others. He used three basic designs and it's interesting to note that the libraries in Mitchell and Listowel were identical except for the exterior materials - precast stone and red brick.

Stained glass windows that included the design of the torch of learning were features of some of the earlier Carnegie libraries. West Perth's library possesses beautiful stained glass windows many of which incorporate the 'torch of learning' design. Noteworthy also is the row of smaller windows on the east wall that are situated high on the wall. This location was to allow for rows of bookshelves along the wall and this is another feature that our Carnegie library shares with the libraries in Walkerton, Lindsay and several of the first Toronto branches.

Until 1963 the town's municipal offices and council chamber were situated in the basement of the library.

West Perth's library saw the replacement of its crumbling front steps in 1997 and smaller interior improvements including window replacement, new paint and carpeting occurred over the next few years.

In February of 2007, the library was notified that the municipality would be receiving a grant of $330,000 which would assist in the construction of an addition to the library's existing building at 105 St. Andrew St. A building committee comprised of members of the West Perth Public Library Board and municipal council was established. Architect Guy Bellehumeur from Stratford was chosen to assist with the design and, after tenders were opened and contractor J.C. Heckman from Mitchell was selected as the general contractor, construction began in earnest in the spring of 2008.

With favourable weather on the side of the construction team, the 2 floor addition of 2841 sq. feet was opened to the public for the first time on October 2, 2008 with an official opening ceremony held on a sunny October 31, 2008.

West Perth now has a newly renovated and expanded Carnegie library with an addition that is complimentary to the design of the original building that opened at the corner of 105 St. Andrew St. in 1910. With thanks to Andrew Carnegie for the original 'best gift', this heritage building will be able to offer library service for many years to come.

The Perth County Information Network (PCIN) is a computerized library network that enables the residents of Perth County to have access to the resources of all of the participating libraries.

In 1997, the Chief Executive Officers of Perth County's libraries began discussing ways of sharing services in order to achieve economies of scale, especially in the area of book purchasing. Within two years these discussions had expanded and reached fruition, and the founding members of PCIN signed contracts to proceed with the implementation of a system that would create a "virtual" library network in Perth County, provide a common library automation system for all of the participating libraries and allow patrons of each of the libraries access to the Internet.

The Stratford-Perth Archives joined the network on January 2002.

Building of the Addition